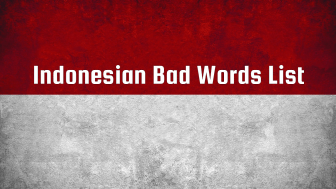 With a population growth rate of 3 million per year, Indonesia has successfully become an overpopulated country. According to Worldometers in 2020, the Indonesian population is now 273 million.

Indonesia has made a relatively large mark in the global economy. It is the region’s biggest economy and part of the G20 group of the world’s richest nations.

The official language is Indonesian (locally known as Bahasa Indonesia), a standardized form of Malay, which serves as the lingua franca of the archipelago.

Our Indonesian Bad Words List is very easy to integrate with any website project containing user-generated content, such as comments and posts, so just copy and paste bad words into your comment blacklist box, when a comment contains any of these bad words in its content, it will be put in the trash. That is all!

Indonesian Bad Words List is offered in three different file formats, CSV file format, TXT file format, and comma-separated TXT format, so you are free to download the one that met your requirements.

(Text File – One word per line)

(PDF File – One word per line)