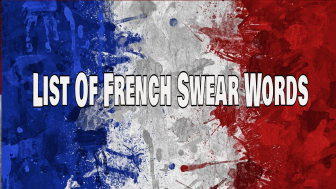 The French language is one of the most important languages in the world, around 800 million people are French native speakers worldwide, mainly in the Americas, Europe, and parts of Africa, and it’s in widespread use throughout Central and West Africa, Madagascar, Mauritius, and North Africa, as well as in many other countries worldwide.

As a matter of fact, swearing in French is much less obscene than in English, and since censorship on television doesn’t exist in France, the idea that certain words are bleeped out on American TV is a bit odd to them.

If you turn on any popular French TV show, just like everyday conversations, French culture is filled with curse words or expressions. But without some knowledge, popular culture and informal conversation can be quite confusing.

Each swear word and curse phrase in the French language comes with its appropriate settings where it should be used. From joking around with friends or stubbing your small toe on the edge of a table to expressing anger towards someone who has wronged you, there is a French cuss word for each occasion.

All French individuals are using a regular dialect with French swearing, yes they can be extremely inconsiderate, but it’s really a delightful dialect yet they do have some appalling words!

A swear word is a word or phrase that’s generally considered blasphemous, obscene, vulgar, or otherwise offensive. These are also called Bad Words, obscenities, expletives, dirty words, profanities, and four-letter words. The act of using a swear word is known as swearing or cursing. The swear word serves many different functions in different social contexts. Swear words may express annoyance, aggression, and insult, for instance, or they may express solidarity and friendliness.

Profanity Words and Your Business!

Please note that most platforms have a profanity filter, just as Facebook, Youtube, Instagram, WordPress, and many more. And according to your platform, you can also find so many free profanity filters and plugins on the net.

Our List of French Swear Words is offered in 2 different file formats, TXT file format, and Comma-separated TXT format, so you are free to download the one that meets your requirements.

Text File – One word per line